Can we reduce the risk of dementia in later life? Latest research reveals the great power of bilingualism

Recent studies have shown that dementia appears up to five years later in people who speak more than one language. In fact, Professor Carol Brayne, a leading dementia expert at the University of Cambridge, explains that higher levels of education appear to protect people against developing dementia. In fact research suggests that around 30 per cent of cases in Britain could be prevented through life style changes.

According to the Alzheimer’s Society, ‘dementia is describes a set of symptoms that may include memory loss and difficulties with thinking, problem-solving or language. Dementia is caused when the brain is damaged by diseases, such as Alzheimer’s disease or a series of strokes.’ They go on to explain that ‘all types of dementia are progressive. This means that the structure and chemistry of the brain become increasingly damaged over time.’

A recent report, on the global impact of dementia, estimates that the number of patients, suffering from the disorder worldwide, will have almost tripled by the year 2050.

Speaking more than one language is thought to contribute to the build up of cognitive reserves which delay dementia symptoms.

The American Association for the Advancement of Science (AAAS) annual meeting, held in Washington DC last week, shed light on how bilingualism can also help benefit a person’s mental health, by delaying brain ageing and counteracting the initial symptoms of dementia, Eurekalert reports. 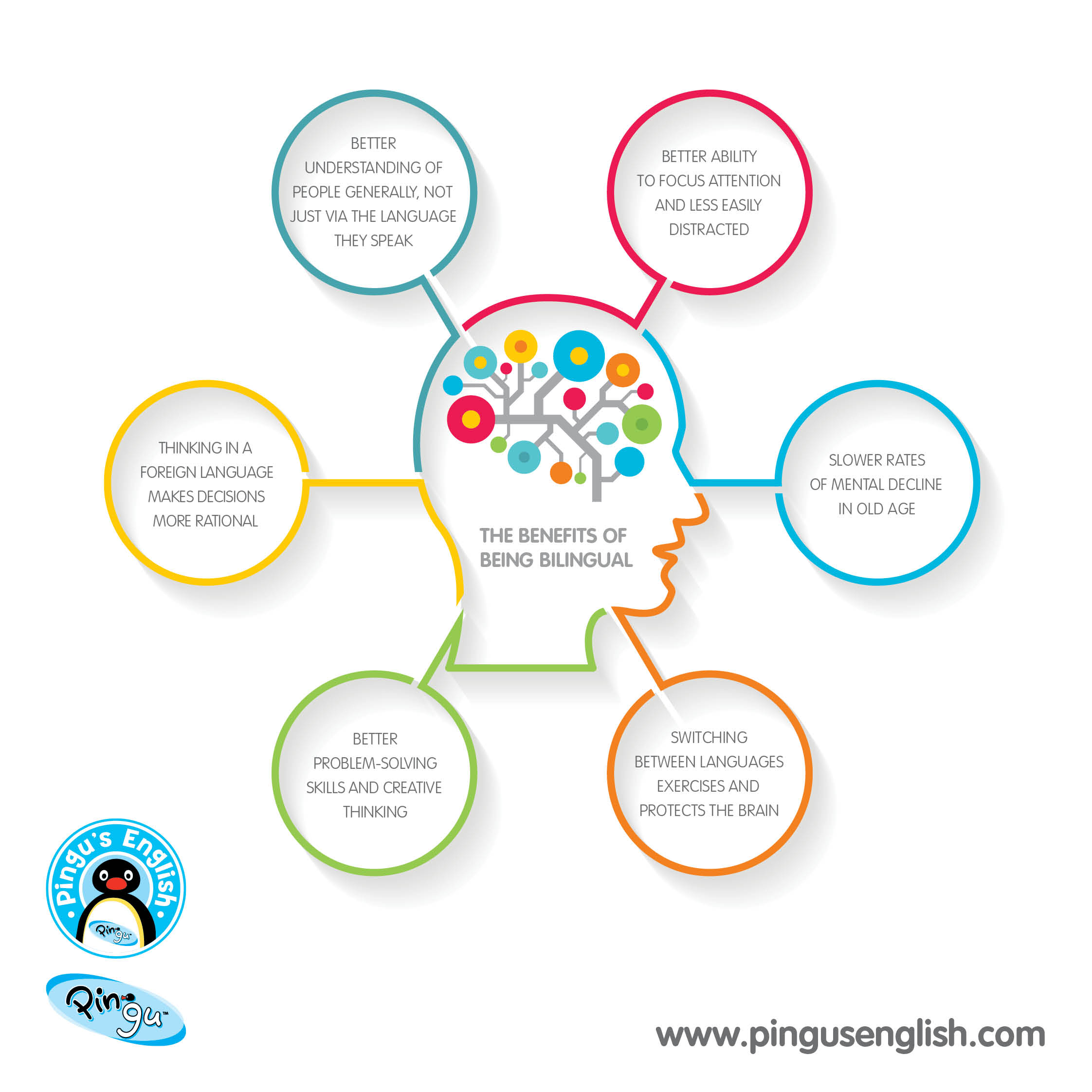 What is the best age to start?

Professor Antonella Sorace, founder of the Bilingualism Matters Centre at the University of Edinburgh, has conducted thorough research into bilingualism across all age groups and has concluded that learning a new language should start as early as possible, even in pre-school years.

Bilingualism gives children much more than a second language. It is beneficial for their future development as they become more aware of different cultures and other people. Bilingual children also tend to have better attention spans than monolingual children.

However, it must be recognised that children don’t acquire language in the same way as most adults. In our early years, we learn through exploration and play. Children recognise and start to use new language when they hear it in situations where they are engaged and feel motivated to use it.

Pingu’s English is a unique method, based on a topic-based spiral syllabus that delivers useful usable language in a children’s context, without all the rules of the grammar and syntax. Certainly, at the age of 3-8+ years, children do not need to know there is a set of rules – they merely need to be encouraged to express themselves using a new set of words.

Research in Canada found that bilingual children who become accustomed to switching between different languages demonstrate greater mental flexibility and cognitive control throughout their lives, which ultimately ward off decline in later life.

Pingu’s English is an exciting English language course for 3-8 year olds, based on the popular HIT Entertainment children’s TV character Pingu with pre-school franchises all over the world.

12 Montessori tips for teaching your child

In 1897, the famous Italian educator Maria Montessori began to develop a distinctive philosophy that would reshape the future of education. She…
Read More
Latest News

Pingu's English is delighted to announce the forthcoming launch of its seventh Pingu's English school, in China. In less than one year,…
Read More
Latest News

How to make the Most of your child's Summer Camp

Our students are very enthusiastic in studying at Pingu’s English. They always tell us how much fun and how much they learn here. Parents also keep saying how proud they are with the knowledge and improvements their children are making.

Brazil is a huge Market and the preschool english education industry is growing very fast. All our franchisees are happy with the Pingu’s English methodology as well as the operational manuals Liguaphone offers to Unit Licensees. They feel very well assisted.

I have being running my own school for 15 years. When I met Pingu’s English, it was love at first sight. Now I am offering the best English Course avaiable to my students and they are loving it as well as their parents. Thank you Pingu’s English!

Pingu’s English Franchisee in State of Mato Grosso do Sul

From our first training session in London 2009- from the academic side to customer service -we felt confident and well equipped with the necessary knowledge and skills to be successful Pingu’s English Master Licensees” At the moment, our services to all 23 networked schools across the country are effectively and efficiently backed by Pingu’s English.  No doubt that we see no limit to expand our business to cover 30,000+ schools in the near future!

Our Experience with Pingu’s English has been profitable and positive from the first year. We relied on their professionalism and heritage, their staff is always prompt to assist with the latest trends and ideas on the market. We were looking for a brand who can guarantee us quality and a solid method but at the same time would leave us the freedom and flexibility in order to succeed in our challenging and competitive market like the Italian one. We built Pingu’s English project in Italy by mixing their huge international experience in the English training with our knowledge of the Italian market. All this enabled us to do the right decision for our winning investment. Today we have over 40 Pingu’s English centres and thousands of happy children learning English

We at the British Chamber of Commerce worked with Linguaphone Group to find them a new in-market partner for the Korean market. Throughout the engagement we had with Linguaphone Group, we found them to be passionate about education, supremely professional in their approach to business and both responsive and personable in their interactions with ourselves and Korean partners. Korean investors were attracted to the best-in-class program which Linguaphone Group offers, the strong reputation of the company and the heritage with which it is associated. These are qualities that resonate globally.

Pingu’s English School is not just a school; it is as a second home for my kid. I like it when I see my kid growing and learning in a friendly and safe atmosphere. Most of all, I can see a lot of improvement in his English listening and speaking skills

We love Pingu’s English School because the school gives my son the opportunity to learn and develop different skills, especially English skills. He is excited every time to go to school and is always happy when he comes home.

Regarding the teaching method they use a figurative storytelling way of starting the lesson,  trying hard to involve the child and make the them curious about the situation. Tom is very happy to go to Pingu’s English because he perceives the School as a playful moment and not just as a learning moment while at the same time he is learning a new language

Now she is studying at Pingu’s English School, my daughter only wants to talk to me in English and she is always singing the songs.

I knew about Pingu’s English School through a friend. After research about the school, I decided to enroll my daughter and it was one of the best things I could do to her. She loves studying at Pingu’s English and she cannot wait to the day of the class. I also love Pingu's English School, because there she learns by playing and I can see her progress day by day.

Abbas always tells me that Pingu's English is the most fun he has all day. I am very glad that this place makes him feel that way and noticeably develop his language skills too